We are very pleased to announce that we will be holding a Christmas potluck dinner on Saturday December 10 at the Irish Cultural Centre. In the past this has been one of our most fun social events, and we sure have missed it over the past couple of years.

Potluck - As in years past, the club is providing the basics, turkey and dressing, potatoes and gravy, and cranberry sauce. We ask the members to use the following guidelines when deciding what to contribute:

If your last name begins with;
A – H desserts
I – Q appies
R – Z side dishes
There will be plates, etc. provided.

Donation - Christmas is often a difficult time for some, and even more so recently with the rising cost of living on top of a couple of years of Covid.  This year’s event will be admission by donation. We are asking you to pay what you can, and in addition bring a non-perishable food item. We would appreciate donations of $10 or more, but again, pay what you can.

We are very excited to have Jarred Albright, with some of his friends, as our entertainment. All of you who know or follow Jarred will know by now that he has just released a Christmas Album and I am sure we will get a taste of this along with more great music.

Doors will open at 5 with dinner at 6 and music at 7:30. If there is time there will be jamming after the concert so bring your instruments and join in Calgary Irish Cultural Center, 6452 35 Ave NW, Calgary, Alberta T3B 1S4 (CA). 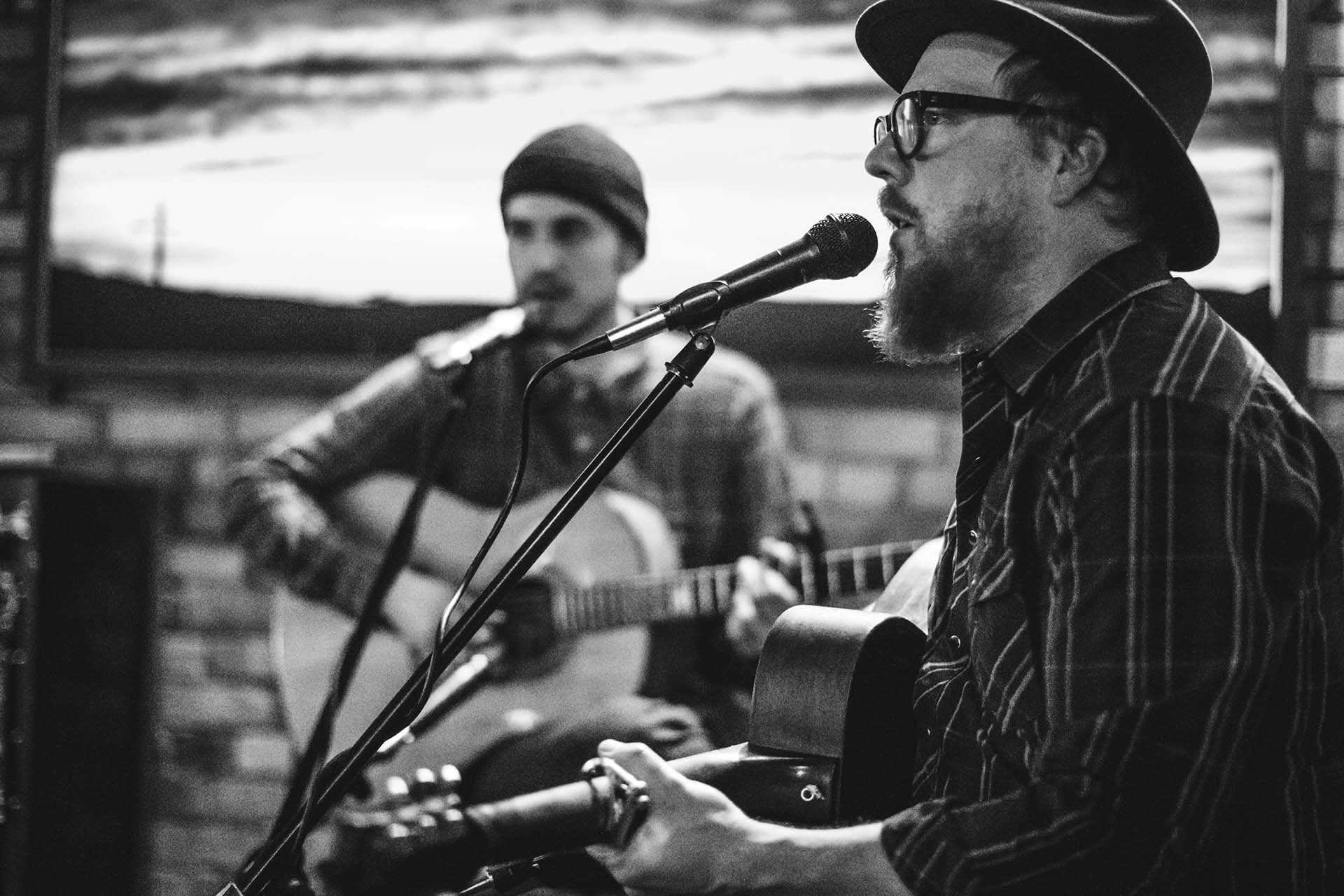 Hi all, we are very proud to present the Doggone Brothers & Friends in Concert Saturday November 26th 2022.

The Annual General Meeting of the Foothills Bluegrass Music Society will be at 6:00 PM and followed by the Concert at 7:30 PM (Irish Cultural Centre at 6452 35th Avenue NW, Calgary, AB)

Your attendance at the AGM is much appreciated.

We welcome new ideas on how we can continuously improve our society and shape our future vision.

We will be discussing our past year and what we have in mind for the future.

There will be several board positions up for election and reports on the financial health of the Society.

The Doggone Brothers are a dynamic duo slinging bluegrass with a dash of old country and a side of old-time music throughout their set of original, traditional, and cover tunes. Homey, approachable, irreverent, and uplifting are all words that describe the Doggone Brothers well. Both seasoned musicians in their own right, Clayton Parsons (guitar and banjo) and Mike Hepher (Mandolin, Octave Mando, Guitar) have a natural chemistry on stage that is infectious and approachable. They are sure to entertain as they duel back and forth with their respective axes—carving a unique sonic experience into any traditional set.

Whether you are a seasoned square dancer, first timer, or just would like to come and watch, this event is going to be a blast.

It is Halloween, so feel free to dress up. You may even win a prize.

The attendance is capped at 80 people and we are expecting a sell out. So get your tickets in advance.

The Slocan Ramblers (2020 IBMA Momentum Band of the Year Award Winner & 2019 Juno Award Nominee) are Canada’s bluegrass band to watch. Rooted in tradition, fearlessly creative and possessing a bold, dynamic sound, The Slocans have become a leading light of today’s acoustic music scene. With a reputation for energetic live shows, impeccable musicianship and an uncanny ability to convert anyone within earshot into a lifelong fan, The Slocans have been winning over audiences from Merlefest to RockyGrass and everywhere in between.

On their much-anticipated album Queen City Jubilee (2019 Juno Award Nominee for Traditional Roots Album of the Year), The Slocans showcase their unique blend of bluegrass, old-time and folk with deep song-writing, lightning fast instrumentals and sawdust-thick vocals. With their trademark raucous energy, this album presents The Slocan Ramblers at the top of their game – writing and playing tunes to keep you up all night. This is roots music without pretension, music to make you feel something – say hello to your new favourite band.

The Slocan Ramblers are:

Open Mic with Al LaMonaca & The Other Guys

Open Mic with Al LaMonaca & The Other Guys

We are very excited to host our annual Open Mic Night.

Anyone is welcome to sign up.  Experience is not a requirement.

However, we would like to keep it “Bluegrassy” so here are some rules:

1. One-three songs depending on how many people show up
2. Besides your voices, only acoustic stringed instruments are allowed
3. We prefer groups over solo performances (JA and the Other Guys are there to back you up if you wish)
4. Feel free to ask anyone else who is there to join you.

Details: Saturday Feb 19 in the Hickey’s Place Pub, downstairs at the Irish Cultural Society, 6452 35 Ave NW, door at 7:00, performance by JA and the Other guys at 7:30 followed by open mic.

Cost $5 at the door. REP covid regulation in force. Please have QR proof of vaccination and ID ready. Sign up in advance at info@foothillsbluegrass.com or at the Pub.

A Calgary-born musician and a mainstay of the Calgary bluegrass scene for decades. Al has been playing guitar, banjo and dobro in bluegrass bands, duos and trios; Stray Dawgs, Rock Bottom, Hothouse Bluegrass Band (opened for Alison Krauss in Calgary) and Wheatland County (kicked off the very first Edmonton Folk Festival in 1978) to name a few.

Having played the violin since he was seven years old and making music his focus ever since he started playing classical music but switched to the fiddle style learning Celtic, folk, old-tyme, and bluegrass before entering post-secondary to pursue jazz performance there.

In 2012 he and Ben Plotnick were awarded the 10k20 grant from Rawlco radio and their bluegrass duo recorded the self-titled CD Rye & Fairy Tales, to much acclaim.

Erik Smistad is a Calgary-based multi-instrumentalist, an active song writer, arranger, session musician, performer and music teacher since 2010. Erik is known for his ability to play any style of music, but he is especially active in the bluegrass, progressive rock, soul and alternative rock genres.

The Annual General Meeting of the Foothills Bluegrass Music Society will be held, as previously advised, on Sunday, November 28 at 2PM at the Calgary Irish Culture Centre.

What to Expect - We expect this meeting will take about an hour and a half.  We plan to report on our activity over the past two years, our financial situation, and what are planning for the next year.  Your attendance and participation is greatly appreciated.

Board Positions - There will be an election of officers and board members.  We are especially looking for a Secretary as this position is currently vacant, and a Treasurer as our current Treasurer has advised she would like to step down. We are also open to having new members at large, especially if you have experience in such things as social media promotion.  If you are an organizer and/or a jump and get it done kind of person, and are computer savvy we will find a place for you.
‍
Covid - As per all events at the ICS you must have proof of vaccination and ID with you to attend the meeting. Alberta proof of vaccine records can be obtain here. The QR code greatly simplifies the process for admittance at the door.
‍
Look forward to seeing you there.

Like the powerful mandolinist and composer at its helm, John Reischman and the Jaybirds fashion a stylish take on bluegrass that seamlessly blends original songs and instrumentals with Appalachian old-time music for a truly unique band sound. Now in their 20th year, with seven acclaimed albums and two Juno nominations, the Jaybirds are simultaneously innovative and unadorned, sophisticated and stripped-down, happily old-fashioned and 21st-century contemporary.

Chilliwack, BC-based Trisha Gagnon is portrayed by Sing Out! as “one of the most versatile” and “irresistible” lead vocalists in bluegrass.

The following restrictions will apply to patrons of the concert as well as volunteers.

1. As per the requirements of the venue, the Irish Cultural Centre, and per the City of Calgary by-law and Provincial regulations, we will be following REP protocol:

All  persons 12 years of age and older entering the venue must show proof of two vaccinations, ie: their vaccination card, as well and acceptable ID, or proof of a privately paid negative PCR or rapid test with-in 72 hours of service, or Documentation of a medical exemption.

Mandatory Masking is required when moving in the centre.

2. The performing artists have additionally requested that all patrons, volunteers, and any others in the venue be masked during the performance.

An exception will be made to accommodate those patrons who wish to take advantage of the available bar service.  There will be a designated area near the bar at the rear of the hall where patrons may enjoy a beverage with seating where they can be unmasked.

By attending this Foothills Bluegrass Music Society live event you are voluntarily assuming all risks related to Covid 19, including exposure and contracting Covid 19.

Further you agree to hold harmless Foothills Bluegrass Music Society and the Irish Cultural Society, their volunteers, directors, contractors and/or artists from liability for any damages, loss or injury related to Covid 19 including exposure to and contracting Covid 19.

Failure to comply with the Foothills Bluegrass Music Society’s or the Irish Cultural Society’s Covid 19 and /or other safety protocols and those of the City of Calgary and/or Alberta Health Services will result in a warning and/or removal from the event at the discretion of the event organizers.  Refunds will not be made to anyone removed for failing to comply with Covid 19 protocols.

Tickets are available online and will be available at the door as well up to the available seating capacity.

Note that these protocols may be amended due to changes mandated by the City of Calgary or Alberta Health Services.  Should there be sufficient reason the event may also be cancelled, with appropriate refunds.

We will be limiting ticket sales to reduce the risk of transmission.