The Shady Grove Bluegrass Festival Will Celebrate Its 30th Year At A New Venue - The Rodeo Grounds In Sundre, Alberta.

The festival will remain the same family friendly event we have had for many years, with some bonuses. The new venue offers excellent dry camping. You can expect to set up and jam with your friends in the same Shady Grove tradition as always.

In addition, because we are in the town of Sundre, those who want to attend but not camp have access to excellent hotels and motel very near the festival grounds.

There will be an open mic, workshops, and great performances. There will also be a saloon, perhaps a beer garden, food trucks, and performances by some of the best bluegrass groups from western Canada.

There will be workshops and facilitated jams, so expect to get some sore fingers by the end of the weekend. See our website for ticket details and the latest information.

Access to the many amenities Sundre has to offer is a great bonus, and part of a perfect getaway, with great gold and over 4000 camping sites in the area. For those that want a little time away from the festival Sundre has restaurants, a historic village, and some wonderful paths and hiking trails close to the festival site.

Denis Dufresne is a multiple award winning artist, musician and studio session musician. His long history in the music business has seen him perform around the globe with many acts in all genre’s of music. From his beginnings in the fiddle supergroup, Barrage, to his time as an established professional, recording and playing for acts like Jann Arden, Gord Bamford, George Canyon, Tom Jackson, Monday Night Football, GhostBoy and MANY others, Denis and his vocal/instrumental abilities have helped propel the careers of several of Canada’s most loved artists. 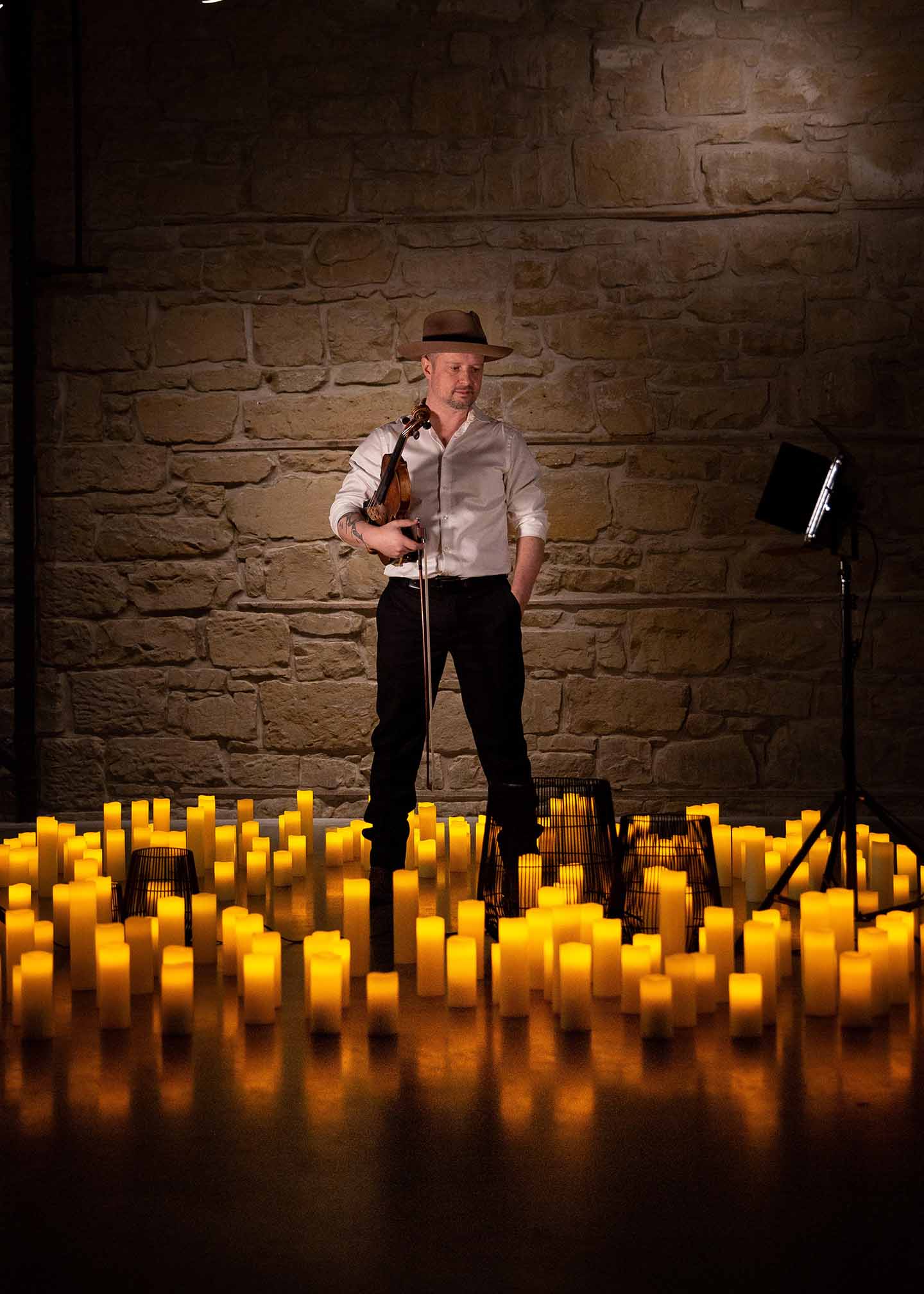 Under the Rocks is an energetic young string band based out of British Columbia, Canada. The band has been together since 2016 but started as a duo years earlier. Comprised of Chris Baxter (Banjo/Mandolin), Jordan Klassen (Guitar), Drew Schulz (Bass) and Chloe Davidson, a 3-time Provincial Fiddle champion, and Canadian Masters Competitor.

Inspired by traditional and contemporary American Bluegrass, UTR applies the modern sensibilities of its collective members to stand on the shoulders of tradition and make music that is creative, reflective, relevant, and entertaining. Under the Rocks pride themselves on the energetic and dynamic nature of their live shows which feature an eclectic mix of musical styles and stories they hope make you want to dance and sing or sit and listen. Whether it is exciting instrumentals, melodic harmonies or thoughtful lyrics Under the Rocks offers something captivating for most everyone.

Steve Fisher has been a mainstay of the acoustic music scene in Alberta for more than two decades as a lead vocalist, guitarist and band leader.

A frequent performer at many festivals and clubs across western Canada and the U.S. Pacific Northwest, Steve is also a well respected acoustic guitar teacher at music camps and privately from his home in Calgary.

He has performed with Rocky Road, The Hot House Bluegrass Band, The Sheep River Rounders, Restless Lester, Chris Stevens, Jenny Lester, Lizzy Hoyt, Connie Kaldor and many others. From 2011 to 2015 he was the host of Fire On The Mountain, a weekly bluegrass show on the CKUA Radio Network.

Artists playing with Steve are;

Allen Christie is one of Alberta's premiere Roots artists. His singing, song writing and guitar playing are perfectly framed by some of the best musicians in Alberta to create a superb live performance. He's perfected his addictive blend of roots, country and folk to create a deeply personal sound that is unmistakably Albertan..and he might throw in some banjo or mandolin for good measure. He sings  with an authenticity that comes from growing up in rural Alberta. His warm delivery of self-penned gems and sense of humor has endured him to audiences across the continent, from Ft. Worth to Inuvik and from Vancouver to Halifax. Allen currently lives north of Caroline Alberta with his dog and whatever wildlife happen into the yard. The door is always open, the coffee is always on and there is always music playing…

Get folked up with Allen Christie and Acoustic Mayhem.

These guys know their way around a tune like no others. As a singer-songwriter, Christie brings his outlaw country, roots-style set to life with quick-witted humour, trippy groovy tunes and stories of the old west, heartbreak, hope, and most importantly, home. Framed by some of the best musicians in Canada, a fundamental understanding of western culture and an unmistakable trademark style, old favourites and new melodies are always fresh as the prairie wind.

Formed in 2020 to sing their sorrow and shred their instruments, the Straight Raisers are 5 poor souls who lost a contest with the devil.

They met while they were all homeless, taught themselves to read, and banded together to face a heartless world that wanted to use them for their looks and generous nature.

The Straight Raisers are;

Canadian roots/swing duo Over The Moon's Suzanne Levesque and Craig Bignell are awarding multi-instrumentalists/vocalists that met, fell in love, got married and discovered their voices blend so well together that people often tear up upon hearing them sing.

Living on a ranch in the foothills of Alberta's Rocky Mountains, it's inevitable there will be a strong sense of place- and the rhythms of the land when you start to make music. When the couple released their debut album, the resonances were there for all to hear. reflecting the pulse of life, lived in a territory that is both dirt-hard rugged and beautiful.

Their music is a wild ride from 40's sounding western swing and Appalachian old-time, to cowboy blues. Simple and sweet, all of their material has a common thread that speaks of the Canadian west and on their UK release, reviews were glowing. American Roots UK saying it was "Exceptional" and Country Music People adding "There's so much to enjoy here. "The editor of Maverick Magazine told readers "You will love this" Elmore Magazine, New York "We knew we were on to something special."

This Kootenay duo is a recent side-project of Clayton Parsons (Clayton & Joelle,The Good ‘Ol Goats,) and Michael Hepher (Redgirl, As The Crow Flies). Both seasoned musicians in the area, Clay and Mike crossed paths at a mutual friends’ birthday party and ended up jamming the night away. That night of jamming turned into a regular thing that they’ve named The Doggone Brothers. The music is distinctly ‘grassy, with fishing, hunting and camping themes throughout their set of original and hillbilly cover tunes. Clay jumps back and forth between guitar and dobro while Mike picks the mandolin and guitar. They are sure to entertain as they keep it fun and loose while duelling back and forth with their respective axes.

Al Lamonaca & the Other Guys

Al LaMonaca, a Roots, Americana and Bluegrass mainstay of the Calgary music scene for decades has played guitar, banjo and dobro in acoustic bands, duos and trios: Stray Dawgs, Rock Bottom, Hothouse Bluegrass Band (opened for Alison Kraus in Calgary) and Wheatland County (kicked off the very first Edmonton Folk Festival in 1978) to name a few. 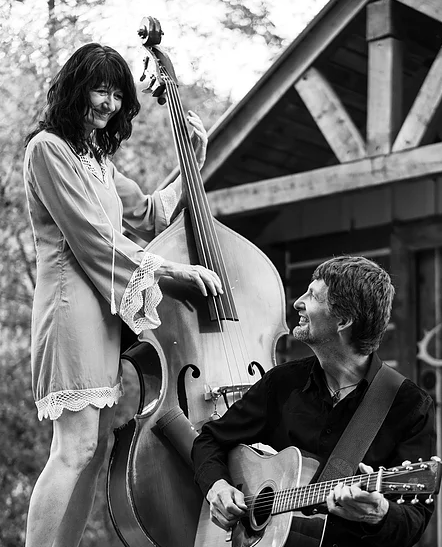 Craig and Rhonda have teamed up to form a versatile duo led by Craig’s outstanding vocals and guitar work accompanied by Rhonda’s harmonies and standup bass. They perform an eclectic mix of country, folk and bluegrass songs against a tapestry of instrumentals and are based in Fernie, BC.

Rhonda Shippy is a much in demand multi-instrumentalist whose journey as a musician started as a youngster playing alto saxophone in a big band, leading to folk and Celtic music on flute and bodhran. For the past fifteen years she has branched out into strings- mainly bluegrass, folk and old time music. Banjo, guitar and mandolin were the gateway drugs and she is currently obsessed with standup bass, returning to her jazz roots. Rhonda plays bass with Craig in their duo and for the Fernie-based group Red Girl, and plays all things stringed with the Bow Folk Trio (with Jarred Albright and Chelsea Sleep) and an old time dance band called Kitchen Party, as well as jazz and blues projects. Teacher by day and musician by night, she has extensive experience teaching and playing a variety of styles of music- and enough theory to be dangerous.

Craig Young hails from the southwest coast of Newfoundland and Labrador. He has worked with many country artists, including Jason McCoy, Eli Barsi, Gord Bamford, George Canyon, Carolyn Dawn Johnson and Terri Clark as well as living and recording as a session player in Nashville for eight years. While there he also embraced bluegrass music and has taken a deep dive into that genre.

Craig’s album "Black Diamond Strings" was released July 2013 to much acclaim, winning the MusicNL award for Country, followed with the album “Charlie's Boogie”, a collaboration with guitar slinging, gypsy jazzer Duane Andrews, which won an East Coast Music Award in 2014 for the "mostly" instrumental album.

Known for his guitar prowess and powerful vocals, Craig has recently moved back west to perform and teach, building a studio where he records and produces projects for other musicians. He is currently touring Alberta and BC and working on a new solo project, due out in the coming year.

Morningside Band is a bluegrass flavored quartet that plays a variety of music that will catch your ears!!! You will enjoy the powerful vocal harmonies, tight rhythms, and sparkling instrumental sounds of Morningside.

These Central Alberta band members have played together in different configurations for many years. Greg Leblanc lays down the bass line on the big ‘ol upright bass and sings the tenor parts. Rick Moore, plays rhythm guitar, doubles on mando and does lead vocals. Lee Foote, transplanted from Louisiana, plays the five string banjo with flash and flair and helps with vocals, too. Brian Ficht provides a sensitive touch on the resophonic guitar and sings some classics, too.

Check out Morningside Band for music thatwill brighten your day!